This version brings us back to focus on our ever-present goals of performance and user experience improvements. Some of the improvements you might be interested in:

We've improved user flow by adding links to Section breadcrumbs. This should improve navigation and reduce clicks especially when you are multiple levels down in the Site Structure.

Up to now, bulk deleting Mirrored Content Items was, how shall we say? Tricky. That's because there are a few things to consider like whether you have links to that Content Item, or whether it was the original or the Mirrored Content Item you want to see the back of. In this release, you'll be given a heads up on what could be affected when you hit that delete button. 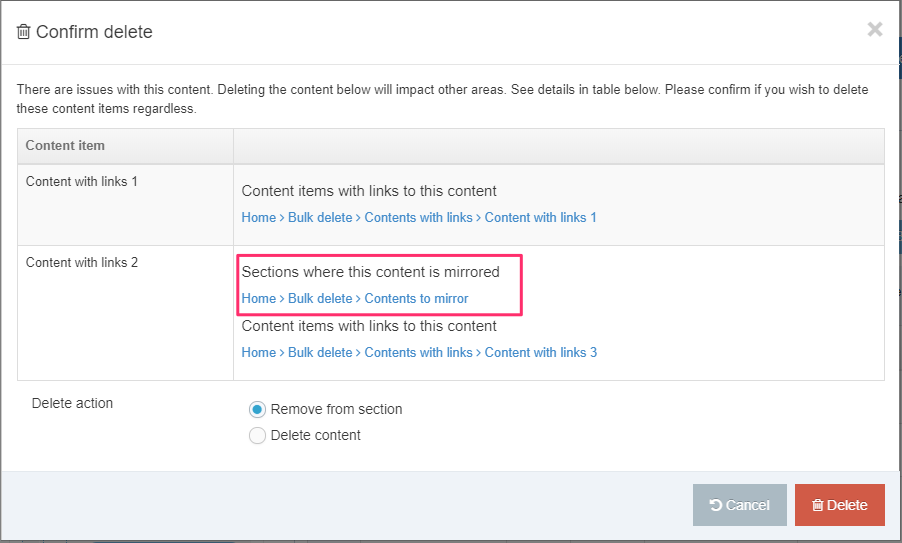 Add media button only for those with rights - RDSM-20795

We now only show the "Add media" button to users who can actually add media. Previously all Users, even those without the correct rights, could see the button though they couldn't actually add media if they clicked it.

On a large scale, we saw that reports could have a negative impact on system performance by eating up too much memory and slowing things down. We've reviewed how reports are stored in memory and made adjustments to make better use of caching and garbage collection to improve how they perform. You should now see improvements to reports for broken links as well as Page Layout and Navigation usage.

On top of a review of reports overall, we also focused on Content Type usage reports and slimmed down the amount of unnecessary data returned in report creation. Cleaning up that overhead has lead to huge performance improvements with test results coming back at a fraction of previous durations e.g., 30 seconds down to 3 seconds on a large install.

Other bugs of interest

As usual, this release includes a number of "business as usual" fixes. Some of the ones that may be of interest to you are:

We've had reports recently on issues with the forgotten password functionality so we picked it, brushed it off, and got it on its feet once again. No need to worry now if you've forgotten your Terminalfour password, we've got your back.

For those of you who study how your publishes are performing you'll be delighted to hear that publish reports are populated again. While we were rummaging around in there we also took a look at getting some small performance gains too – if you make use of 'page created date' you should see a performance gain in your publish.

Paragraph field in forms is too short - RDSM-32230

We received feedback that the paragraph field on forms was too short to give important information to form users. We've increased that limit now to 1000 characters instead of 256.

In advance of the upgrade please view the information and Technical Roadmap. Please contact us prior to upgrading we can provide you with the pre and post-upgrade tasks.

Please note that the priorities assigned to bugs differ from those assigned to Client Support tickets: